Three suicide bombers, two females and a male, were on Friday intercepted by policemen, the spokesman of the police, Victor Isuku told reporters. 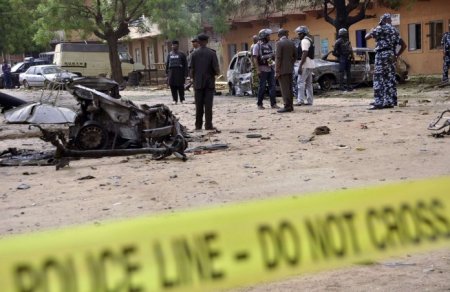 Isuku in a message to Punch correspondent said the incident happened at 3:50am at Jiddari Polo area of the troubled town.

He said: “By 3:50am today, mobile police personnel on guard duty opposite the Federal High Court, Jiddari Polo area of Maiduguri, sighted three suspected suicide bombers (two females & a male) running towards their sandbag. They ordered them to a halt for questioning. In the process, one of them detonated the IED strapped to her body, killing herself and one other male accomplice.

“The other female survivor was arrested alive and subsequently handed over to the military for further explanation and necessary follow up actions.”

He added that: “Police bomb disposal units also mobilized to the scene to detonate unexploded IEDs on the bodies of the deceased suicide bombers.”

Isuku who revealed that there were two explosions, revealed that: “The second bang was as a result of the demolition of the remaining IEDs by police EOD units.”