The Price of sachet water, popularly known as ‘pure water’ has skyrocketed to N10 from N20 per sachet while bottled water rose from N50 to between N70 and N80 in some parts of Edo State, The Nation reports.

Speaking with The Nation in Benin City, the Edo State capital, a ‘pure water’ hawker, Helen Usunobun said they could not cope with the hike in price which would leave them making N30 profit for every bag of satchet water.

Her words, “They said dollar has gone up. Whether dollar is in the water, we don’t know.”

Another hawker, Mrs. Enoma Blessing, said people that used to consume four satchet water, now buy only one per day. 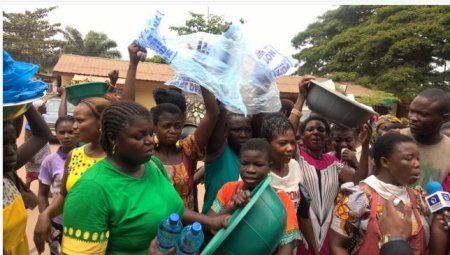 According to him, “Nobody can give water treatment and sell at the former price of N100. It is a terrible situation we have found ourselves.

“It is the sourcing of the materials that is causing these problems.”

Chairman of the Water Producers in the state, Henry Eremokhai, said the approved price by the association was N120.

This development led hawkers of the product to a protest lamenting low patronages.