The former President, Goodluck Jonathan, has downplayed claims by the Chairman, Presidential Committee on Anti-corruption (PACAC), Prof. Itse Sagay (SAN), that Nigerians would have been crossing the Sahara to Libya had he (Jonathan) stayed in office for another three years.

Jonathan, who reacted through one of his aides, Reno Omokri, said facts suggested otherwise, stressing that the nation’s economy was better under his tenure than the present administration. 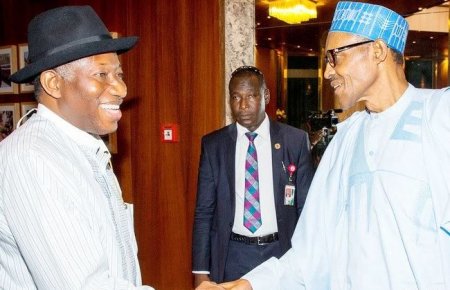 “Furthermore, under President Muhammadu Buhari, the United Nations reveals that there has been a massive increase in the number of Nigerians fleeing Nigeria via the desert with 602,000 leaving annually and 27,000 dying every year either in the Sahara Desert or the Mediterranean Sea. So by what parameter is Sagay using to make his jaundiced judgment?

“Under former President Jonathan, Nigeria was the first nation in the world to evacuate her citizens from Libya during the Arab Spring.

“Dr Jonathan would never keep quiet if Nigerians are being sold as slaves in Libya. If President Buhari can call Nigerians “criminals” to the Telegraph of U.K, why should Nigerians be surprised when he does not act to free us from slavery in Libya?

“Professor Sagay spends too much time poking his nose into other people’s affairs and too little focus on his own business, that is why under his watch as chairman of the Presidential Advisory Committee on Anti-Corruption, PACAC, Maina got recalled, reinstated, double promoted and still received salary (according to his lawyer).

“That is why the Group Managing Director of the Nigerian National Petroleum Corporation, Maikanti Baru, was able to award $25 billion worth of contracts without due process.

“That is why $40 million was found in an Ikoyi apartment and Nigerians still do not know who the money belongs to.

“That is why there has been unbridled looting around President Buhari to the extent that the Presidential Clinic at Aso Rock does not have ordinary Panadol, despite the billions allocated to it under President Buhari.