The Nigerian military has declared the pro-Biafra separatist group, IPOB, a “terrorist organisation.”

In his statement tittled: "PUBLIC AWARENESS ON THE STATE OF INDEPENDENT PEOPLE OF BIAFRA", Mr. Enenche, a major general, listed five reasons the military considered for labelling IPOB a terror group.

1. The Independent People of Biafra (IPOB) group which has posed to be a security challenge in the Country, has been metamorphosing from one stage to the other. After due professional analysis and recent developments, it has become expedient, to notify the general public that; the claim by IPOB actors that the organization is non-violent is not true. Hence, the need to bring to public awareness the true and current state of IPOB. In this regard, some of their actions, clandestinely and actively, that has been terrorising the general public among others include;

a. The formation of a Biafra Secret Service.

e. Militant possession and use of weapons (stones, molotov cocktails, machetes and broken bottles among others) on a military patrol on 10 September 2017. 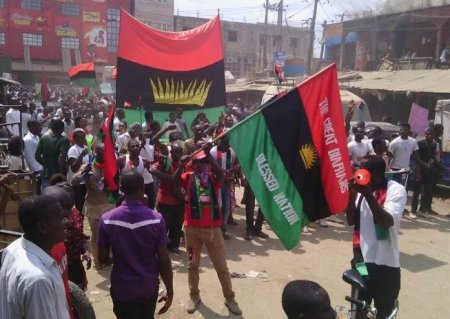 f. Physical confrontation of troops by Nnamdi Kanu and other IPOB actors at a check point on 11 September 2017 and also attempts to snatch their rifles.

g. Attack by IPOB members, on a military check point on 12 September 2017, at Isialangwa, where one IPOB actor attempted to snatch a female soldier’s rifle.

3. From the foregoing, the Armed Forces of Nigeria wishes to confirm to the general public that IPOB from all intent, plan and purpose as analysed, is a militant terrorist organisation. Therefore, parents and particularly unsuspecting residents of the South East and other Nigerians should advice their wards to desist from joining the group.

4. The Defence Headquarters restates its commitment to handling all the security challenges in the Country and further assures all Nigerians of the protection of lives and property.
E

Curators
@RemmyAlex your people in the senate, where are they? Shouldnt they convene emergency session to address this issue abi they are still holidaying??
P

ese said:
@RemmyAlex your people in the senate, where are they? Shouldnt they convene emergency session to address this issue abi they are still holidaying??
Click to expand...

Nigerian government is making the issue to be a minor one but deep within them.... It is an escalated issue.

Eneche Has just confirmed why we said that many Nigeria generals are the list Educated in Africa. We advice that he consult his dictionary on a definition of terrorist.
P

Marcel Uzendu said:
Eneche Has just confirmed why we said that many Nigeria generals are the list Educated in Africa. We advice that he consult his dictionary on a definition of terrorist.
Click to expand...

Okay, he is among the least educated. Let's have another discussion.

Fulani herdsmen, the Arewas and their cohorts are charity organisations doing social works and saving lives. Rationality has drastically declined in Nigeria. Chai! There is God ooo.