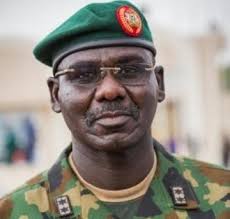 Buratai gave the order on Tuesday via a statement issued by the Army spokesperson, Sani Usman, a brigadier general.

This is to inform the public that the Chief of Army Staff (COAS), Nigerian Army, Lieutenant General TY Buratai, has received information that some individuals have been approaching some officers and soldiers for undisclosed political reasons. On the basis of that, he has warned such persons to desist from these acts.

He also reminded them that Nigerian Army is a thorough professional, disciplined, loyal and apolitical institution that has clear Constitutional roles and responsibilities.

Therefore, he seriously warned and advised all officers and soldiers interested in politics, to resign their commission or apply for voluntary discharge forthwith.

Any officer or soldier of Nigerian Army found to be hobnobbing with such elements or engaged in unprofessional conducts such as politicking would have himself or herself to blame.

The COAS has further reiterated that the Nigerian Army will remain apolitical and respect the Constitution of the Federal Republic of Nigeria.

Meanwhile, PREMIUM TIMES is reporting that the warning was issued because the Army hierarchy was disturbed by rumours of a coup being planned by junior officers. A lieutenant general, is said ti have raised the issue with Acting President Yemi Osinbajo and promised to nip it in the bud.