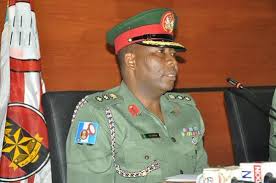 Director, Army Public Relations, Brig. Gen. Sani Usman, made the threat during an interview with PUNCH.He said: “It is an offence. I expected journalists to have done their homework very well. The Penal Code is there. And I think the punishment is even mild.

“Knowing what the law says about wearing military camouflage is part of basic civic responsibility. I also know that ignorance of the law is not an excuse.

“However, for the benefit of doubt, please know that Sections 110 & 111 of the Nigerian Criminal Code Act states: Any person who unlawfully wears the uniform of forces, etc. L.N. 112 of 1964. 1967 No. 27(1) not being a person serving in any of the armed forces of Nigeria, wears the uniform or any part of the uniform of such forces, or any of the armed dress having the appearance or bearing any of the regimental or other distinctive marks of such uniforms; or (2) not being a person holding any office or authority under the Government of Nigeria or of any part thereof, wears any uniform or distinctive badge or mark or carries any token calculated to convey the impression that such person holds any office or authority under the government; is guilty of an offence and is liable to imprisonment for one month, or to a fine of N10, unless he proves that he had the permission of the President or of the Governor of a State to wear such uniform or dress, badge or mark or to carry such token: Provided that this section shall not apply to the wearing of any uniform or dress in the course of a stage play or in any bona fide public entertainment”.