Durable luxurious Sideboard in Maple Wood - ₦150k (made to order)
Maple Wood with 3 drawers and 2 doors
Ad
The Nigerian navy has announced the release of the list of successful candidates in the aptitude test that was held nationwide on August 12, 2017. 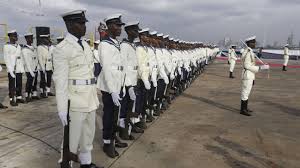 In a statement issues on Tuesday, the spokesperson of the Navy, Suleman Dahun, said that “successful candidates are to report at the Nigerian Navy Secondary School, Ojo, Navy Town, Lagos for the final selection interview which is scheduled to hold from Friday 25 August 2017 to Saturday 14 September 2017.”

Mr. Dahun, a captain, said that the candidates are to come along with the original copies of their credentials, sporting kits and writing materials for the exercise.