Curators
FREE Nigerian Business Directory
✅ NEW - get your business listed and your information shared across social media.
Ad
The Nigerian Navy has foiled an attempt by suspected sea pirates to hijack and abduct 13 foreign nationals on board a merchant ship leaving Nigeria for Cameroon. 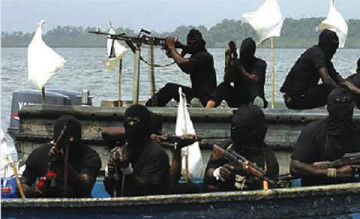 Hassan said the crew members, including the ship’s captain, were of mixed nationalities consisting of seven Philippinos, two Romanians, one Russian, one Polish, one Indian and one Croatian.

Hassan said that troops were unable to apprehend the pirates due to poor visibility partly caused by torrential rain on the day of the rescue.

He said that the navy under the Chief of the Naval Staff, Vice Adm. Ibok-Ete Ibas, remained committed to the safety of the nation’s waterways and maritime environment.