Security agents have identified the Nigerian suspected to be operating the proscribed Indigenous People of Biafra (IPOB) in Paris, France, The Nation gathered.

The government last week said money was being raised from some Nigerians in the diaspora to fund IPOB.

Funds raised from the diaspora Nigerians’ donation and other sources are remitted to an account in Paris from where it is disbursed for the organisation’s activities.

The account holder was not named at the weekend. 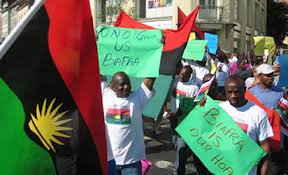 A source said: “Security agencies are still conducting more checks before releasing the details on the fellow running the Paris, France account on behalf of IPOB and its leader.

“When the necessary investigation is completed, the findings will be presented to the French government for appropriate action in line with the laws in France.

“These agencies will also trace other accounts in some jurisdictions where funds were remitted into the Paris account.”

The proscription of IPOB has been sealed with the Federal Government’s gazette of its ban.
PLACE YOUR ADVERT HERE
Connect with people interested in education, social, crime and health News!