FREE Nigerian Business Directory
✅ NEW - get your business listed and your information shared across social media.
Ad
An Abuja High Court sitting at Jabi has ordered the Economic and Financial Crimes Commission, EFCC, and the Nigerian Army, to forthwith, release Col. Nicholas Ashinze, a former aide to the erstwhile National Security Adviser, NSA, Col. Sambo Dasuki (retd.), who has been in detention since December 23, 2015.

‎In a judgment on Monday, Justice Yusuf Haliru, directed the respondents to immediately release the applicant on self-recognition, saying his detention for over three months without trial, was “‎illegal, wrongful, unlawful and constituted a blatant violation of the fundamental rights of the applicant”. 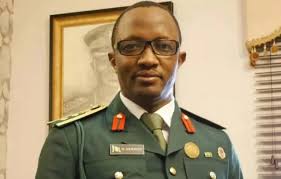 The court also ordered immediate release of documents and items the anti-graft agency seized from the house of the applicant.

‎Justice Haliru blasted both the EFCC and the Army which he said acted as if Nigeria was still under military ‎dictatorship.