Impeccable sources told New Telegraph that Mrs. Lara Amosu was picked up by the EFCC operatives last week in Abuja.

She has been in the custody of the EFCC in Lagos for the past one week. It was learnt that her lawyer has been battling without success to get her released. Mrs. Amosu’s arrest followed the alleged discovery of about N3 billion in her bank accounts. She was allegedly holding the money in trust for her husband.

A source informed that other properties traced to the former CAS were also being held by his wife and children.

Amosu was arrested two weeks ago by the EFCC over his involvement in the arms scandal. “Shortly after Amosu was picked up in Abuja, his wife, Lara, was subsequently arrested. Investigations conducted showed that some of the monies the former Chief of Air Staff made through some contracts and procurements in NAF were traced to his wife’s accounts. 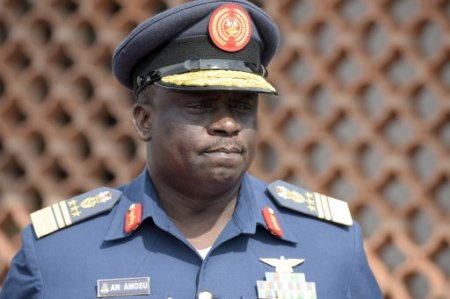 According to the source: “In continuation of the investigation into the arms probe, the EFCC operatives took Amosu to his residence in Badagry. After a thorough search of the residence, a fresh small ‘soakaway’ pit was discovered in the compound.

The operatives suspected foul play, which informed the breaking of the ‘soakaway’. Surprisingly, $1 million was found in it. The money was subsequently confiscated.”

there is need efcc operatives to have scanner, so that they can traces any money that are hiding

Kudos to efcc and more grease to your elbows. But I implore you to be more courteous, more equipped, faster and be more transparent in your investigations and findings.

Amazing! This is a symbol of greediness and wickedness. Well done EFCC.
B

Sorry what kind of Madness is that?

Can these men be taken to the gallows at least for once?? What's there to judge again? Well how do I blame when a coward said "stealing isn't corruption". That cash can feed individual Nigerians even with change remaining. May the blood of the innocence speak against them.