For Sale - One Bedroom Executive Flat - Lagos (NGN37m)
✅ NEW - car park, swimming pool, 24 hours light/security and more.
Ad
The Economic and Financial Crimes Commission on Monday filed before a Federal High Court in Abuja a fresh evidence of N300m allegedly received by a former Chairman, Board of Trustee of the Peoples Democratic Party, Haliru Bello, from the Office of the National Security Adviser, on February 27, 2015.

The fresh case was as a result of an operative of the EFCC, Rouqayyat Ibrahim, who opened her testimony as the first prosecution witness on February 16, 2016, said on Tuesday that investigation had further revealed that Bello received N300m from ONSA in two tranches of N150m each. 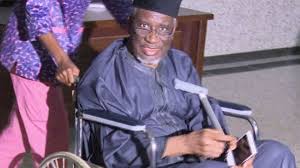 The EFCC had earlier arraigned Bello, his son, Abba, and a firm, BAM Project and Properties Limited (owned by Abba), on four counts of money laundering involving a separate sum of N300m security funds which they allegedly received from ONSA last March