The Nigeria U-20 team, the Flying Eagles, beat their Burundian counterparts 2-1 on Saturday at the U.J Esuene Stadium in Calabar to progress to the final round of the Africa Cup of Nations for Under 20s.

The team had earlier promised to make the match a win in honour of the two late Former Super Eagles coaches, Stephen Keshi and Amodu Shuaibu. 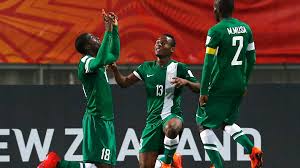 Victory for the Flying Eagles was virtually sealed in the 80th minute when captain of the team Kelechi Nwakali curled in a beautiful free kick from outside the box to make scores 2-0.

Though Burundi pulled one back, it was too little too late as the Flying Eagles marched on and are now closer to securing their berth at the tournament to be staged in Zambia.