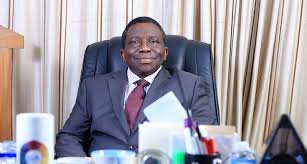 According to PUNCH, speaking with journalists on the sidelines of the inauguration of Central Pharmacy Store and Maternity Building at the Obafemi Awolowo University Teaching Hospital Complex , Ile Ife, the Minister said, ''I won’t describe it as a large volume but we still have people travelling abroad. One, it is a matter of choice and secondly, there is what is called bonding between a doctor and his patient irrespective of where the doctor is and that creates a problem, the patient may not want to see a new doctor.

''If a patient is seeing a particular doctor and that doctor is not around he may likely wait. You don’t want to be examined by a new doctor, you don’t want to start all over again. It is one of the reasons and you can’t take it away.”

Adewole said, ” The President is the best person to speak on this, he is our leader but also a private citizen. He is entitled to making a choice which will be influenced largely by the advice of his doctor.”
Share:
Facebook Twitter Reddit WhatsApp Email Link
[2412]
Show hidden low quality content