Every time you vote for a Nigerian politician, you know you are taking a gamble. The fine words, the empty promises, the nice clothes and bleached smiles, the shared dance and camera induced enjoyment of street food, are all part of the stage, and a stepping stone for power.

Over the past few weeks, we have seen the full stack of cards from Nigerian politicians: the jokers, the kings and the queens, but very few aces. Disappointed supporters from all sides have been left wondering if they should hold, fold or walk away. One thing is certain, the future progress of Nigerians is not a part of this poker game. 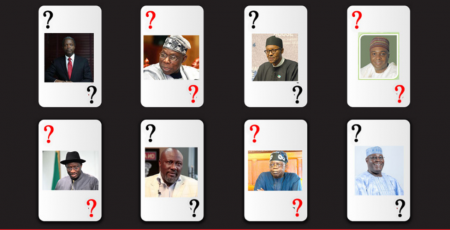 So who is at the table?

It is easy and lazy to play this as a game between the corrupt and the incorruptible. To make a true assessment, we need to know a little bit more about the players and the cards they hold or have been dealt. We also need to take a good look at the games that have been previously played.

We can look around the world for inspiration where the bluffers, helped by an increasingly sceptical following and fuelled by click-through rates, are seizing the seat of power.

In Nigeria, there are three main teams on the table but there are four chairs. The teams we know are the presidency, the senate and the judiciary. The forth chair has been occupied by different fractions over time. They are there to make sure the cards are stacked well against their enemies, whichever side that may be. Collectively and affectionately, they are known as the CABAL. Membership to the cabal can be actual, or in many cases, rumoured based on your standing in society. This includes Nigeria's business elite, religious leaders, former military heads of state, former governors, senators, house rep members etc.

What is the game?

The game is poker: a family of card games that combine gambling, strategy and skill. The politicians are not gambling with your future, but making a bet on theirs and their families’. That is what matters to them. Legacy is not a word that means anything beyond the sitting room and the 'other room'. Do not take it personally, but you matter not, whether you’re from the North, East, West or South. Power and money, are the currencies on the table, not love.

Who should you bet on?

Now that we have settled that no side is going to look after your interest, you might have very little interest in the outcome. However, it is important to know the game and be able to see a bluff coming a mile away. It means there will be an evolution down the line and Nigerians might start getting representation at the table.

Currently, membership at the table is APC only, now that all PDP members have migrated physically or in spirit. The 'Change' motto was a call to change seat, mind and party. It created sweeping transformation of all politicians and replaced horns with halos. However, just when you thought the brotherhood was about to break into song, they needed to decide whose seats where in the tripod of power in Nigeria.

Remember this a game of poker; you need to have a strategy, take a punt and have the skill to execute. While the other brothers sang 'trust and obey' as agreed after the elections, a select group broke out into a rendition of Michael Jackson's bad - Your butt is mine- they sang as they took over the senate. That was the end of the brotherly and, in several ugly incidents, sisterly love. The scene was then set for what is truly a falling house of cards. There was no reply from the choir, as the conductor stood confused, baton in hand, willing for a new tune of change to be played for the increasingly restless audience.

We've all had front row seats to budget padding, mobile presidency, silent ministers, ICPC drama, EFCC invites, judicial arrests and a raucous assembly. We have seen the mangling of Magu and the dressing down of Ali. During the last week, we were entertained by the search for any of Dino Melaye's certificates and eventually got some details about the bullet proof car that nobody owns. At the end of it all, as many times before, it has come to nothing.

There are many signs of cracks in the presidency, which were first exposed by the first lady's interview with the BBC. It was again compounded by the president's medical 'vacation' in London. The media machinery of the acting president was certainly ramped up and delivered a bloody blow to the perceived go-slow style of the president. This was not a comfortable time for some and it was further rumoured that Mr President was rushed back to stem any thoughts of permanent handover.

At the start of the 'change' journey, the assumption was that the presidency had a great hand. Unfortunately, the other players, by deduction, have realised that the presidency is many cards short of a royal flush. The presidency is still keeping all cards close its chest, but I fear the senate leadership knows the game and is willing to call the presidency's bluff. With only 2 years to go till the next election, there is no more time to hold. You either call or you fold.