FREE Nigerian Business Directory
✅ NEW - get your business listed and your information shared across social media.
Ad
The leader of the Indigenous People Of Biafra (IPOB), Nnamdi Kanu has been granted bail with strict conditions on health grounds by a Federal High Court, Abuja.

1. Each of the sureties are to deposit N100million each.

2. Kanu, was expressly barred from attending any rally or granting any form of interview.

3. He must not be in a crowd exceeding 10 persons. 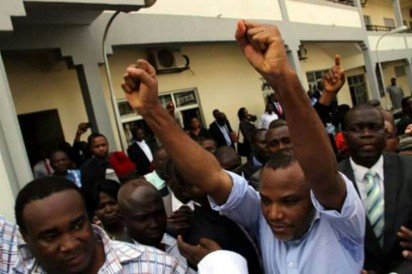 4. He won't be given back his passport and not allowed to grant press interviews according to bail conditions

5. Radio biafra director, Nnamdi Kanu will be allowed to go home after meeting bail conditions as a result of negotiations with Federal government.

Justice Nyako equally held that Kanu who has been in detention since October 14, 2015, when he was arrested by security operatives upon his arrival to Nigeria from the United Kingdom, must sign an undertaken to make himself available for trial at all times.

Kanu was ordered to surrender his Nigerian and British international passports, even as the court compelled FG to return to him, his wedding ring and reading glasses. However, Kanu’s co-defendants, Chidiebere Onwudiwe, Benjamin Madubugwu and David Nwawuisi were denied bail by the court which has fixed July 11 and 12 to commence their trial.
P

RemmyAlex said:
3. He must not be in a crowd exceeding 10 persons.
Click to expand...

Are his family members not more than 10?
C

I thought of that as well
P

Oluogunjobi said:
Are his family members not more than 10?
Click to expand...

They will not hold meeting in public. Family affairs should be private
T

This is inhumane
D

Tony Jay said:
This is inhumane
Click to expand...

Thant won't be a problem at all