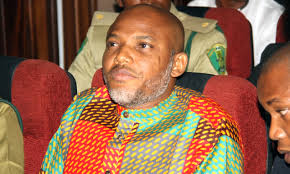 A statement released by IPOB read, ''The court case that is coming up this Monday in the Federal High Court, Abuja is between our leader Mazi Nnamdi Kanu and federal government of Nigeria on the concocted charge of treasonable felony without proof or evidence.

“Nigeria has the dubious distinction of being the only contraption on earth where those that hold opposing views to that of the government are locked up on the grounds of being treasonous yet no single evidence to back up the claim.

“The Nigerian Government and her APC Party led by Muhammadu Buhari through her security agencies especially the Department of State Services, DSS, has been bringing frivolous charges against our leader, Mazi Nnamdi Kanu and IPOB, which have never held any water from day one because God Almighty (Chukwu Okike Abiama) in his infinite mercy has opened the eyes of the judges to see the truth hence the quashing of some of the charges preferred against them, we expect Justice Binta Nyako to discharge some of the remaining charges.

“However, we are urging the Nigerian government and her judiciary to stop embarrassing themselves in the face of international community and foreign observers that will be in the court on that day by dropping the remaining charges preferred against our leader Mazi Nnamdi Kanu and other members detained illegally alongside him in the prison since almost two years now”.

“At the last court session, some of the silly charges were dropped. It was also determined on the 7th March 2017 and pronounced to the hearing of the world that Indigenous People of Biafra IPOB is a lawfully constituted organisation which has been welcomed by the international community and foreign policy makers in the various countries of the world”.

“In other words, the whole world is looking forward to see the Nigerian government, the judiciary and the Federal High Court to do the needful by removing other charges against the members of a lawful organisation like IPOB because they did not commit any crime against humanity or Nigerian State.”