FREE Nigerian Business Directory
✅ NEW - get your business listed and your information shared across social media.
Ad
Eze Israel Kanu,, the father of IPOB leader Nnamdi Kanu has called on the federal government to drop the charges against his son.

“I call on the Federal Government to immediately withdraw all the charges preferred against Kanu in the interest of peace in the country," the traditional ruler of Isiama Afaraukwu in Umuahia, said in an interview with the News Agency of Nigeria (NAN) on Monday.

“He did not commit murder. He did not carry arms; neither did he commit any heinous crime to warrant such a government clampdown. His only offence was that he expressed his opinion in a democracy where people are free to express themselves without the fear of arrest or molestation,” he said.

He added that Nnamdi Kanu is of age, and is free to express his views and opinions.

“He is more than 18 years of age and has become an adult. He is capable of having an independent opinion on any issues. So, I cannot ask him to stop pursuing what he believes in.

“The only thing that can assuage him is to allow him to have Biafra and no amount of inducement, even giving him an oil block, would stop him.” he said. 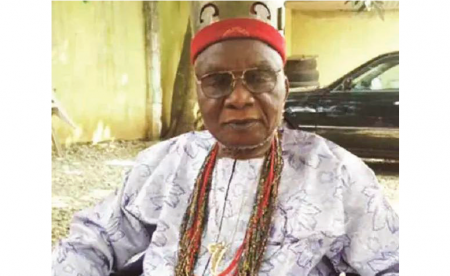 He described the two-year incarceration of his son as a period of depression.

“Very often, I kept wondering what would be his fate and hoping also that he would not die in detention. I had very strong hope that God would not allow him to die in the cell,” he said.

He also spoke on how he felt when the IPOB leader arrived at his palace on Friday, after regaining his freedom, saying that he felt very happy and excited.

“He looked quite healthy and strong. His looks showed that the prison warders took good care of him, so I was very happy and impressed when I saw him,” he said.
Y

U re right...long live the king ..u shall live long.. Biafra had gone far...going. back will be a mistake or a disaster for them. free Biafra ..free d Igbo race..Call hail Biafra. Biafra

Like father like son. The man is good a father and bravado for that strong words. Up Biafra! Up Nnamdi Kanu!! Up IPOB!!!