FREE Nigerian Business Directory
✅ NEW - get your business listed and your information shared across social media.
Ad
The corpse of the notorious kidnapper and militant, Don Waney was brought to the 6 Division of the Nigerian Army, Port Harcourt on Sunday morning by soldiers and operatives of the Department of State Services.

Don Waney, whose real name is Prince Igwedibia, was shot and killed alongside his second-in-command and another member of his gang. 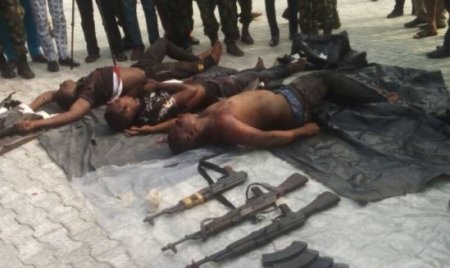 Waney and members of his gang were fingered in the gruesome murder of 17 persons in the early hours of the New Year.

Our correspondent, who is currently at the 6 Division Army Base, gathered that the hoodlum was shot in a community in Enugu.

A source in the Army confirmed that contrary to an earlier report, Waney was trailed and killed in Enugu.
You must log in or register to reply here.