Metro Oba of Benin Finally Speaks, Says He Didn’t Order Humiliation of Man Sent Out of His Palace

Durable luxurious Sideboard in Maple Wood - ₦150k (made to order)
Maple Wood with 3 drawers and 2 doors
Ad
The Oba of Benin, His Royal Majesty, Oba Ewuare II, has ordered an investigation into the alleged manhandling of an elderly man who was sent out of the palace for violating the Benin tradition. 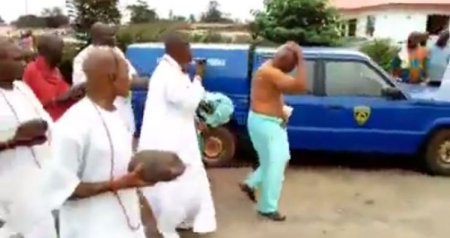 The man, suspected to be of Benin origin, had last Thursday been reportedly chased out of the palace for allegedly failing to kneel before the monarch in obeisance and in line with the Benin custom.

The incident was said to have occurred during the weekly peace mediation by the Oba.

A video of the man being chased out of the premises half-naked by some palace officials had gone viral with some online media identifying him as a Benin Chief who was banished.

But the Oba, in a statement signed by his Chief Press Secretary, Mr. Desmond Agbama, on Thursday, dismissed the claim that the man was a Benin chief.

He also said that though the elderly man was found with “abominable objects,” he (Oba) never ordered him to be manhandled.

“For the avoidance of doubt, the man in question is not a chief in Benin Kingdom as has been ascribed to him.

It added, “At no time did the Oba order the man to be manhandled.

“The persons who escorted the man out of the palace may have over-reached themselves in their efforts to protect the tradition and culture of the Benin people and the sanctity of the palace. However, the Oba of Benin has ordered a full investigation into the incident.”

Source: Punch
You must log in or register to reply here.