FREE Nigerian Business Directory
✅ NEW - get your business listed and your information shared across social media.
Ad
David Garrow, author of the new book, “Rising Star: The Making of Barack Obama,” is claiming that Former US President Barack Obama, proposed to a different woman, Sheila Miyoshi Jager- twice - before he met Michelle. 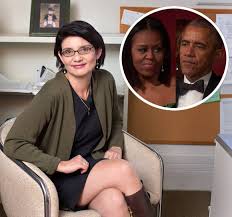 Jager was of Dutch and Japanese ancestry and, like Obama’s distant mother, also studied anthropology.

As the relationship progressed, they started discussing marriage. “In the winter of ‘86, when we visited my parents, he asked me to marry him,” she told Garrow. Ironically, Jager’s parents were opposed to the union due to concerns over Obama’s professional prospects and because they thought she was too young ; INDEPENDENT UK reports.

By the time Obama was about to leave Chicago to go to Harvard Law School the relationship was falling apart, but that didn’t stop him asking Jager to go to Harvard with him and get married - never mind the fact that she was going off on a research trip to Seoul.

After his first year of law school, Obama met Michelle Robinson at the law firm where she worked and he was a summer associate. They soon found themselves in a serious relationship.

However, Jager was not completely out of the picture as she was soon to arrive at Harvard on a teaching fellowship. “Barack and [Jager] had continued to see each other irregularly throughout the 1990-91 academic year, notwithstanding the deepening of Barack’s relationship with Michelle Robinson,” Garrow writes.

However, after Barack and Michelle married in 1992, Jager says that they stopped seeing each other and their contact was limited to the odd letter or phone call. The Obamas have not publicly responded to the claims in the book.
E

Curators
her loss!!! this is why you shouldnt toss every guy away, you can friendzone some for life.
A

ese said:
her loss!!! this is why you shouldnt toss every guy away, you can friendzone some for life.
Click to expand...

They were not destined together.
C

ozioko Josh said:
They were not destined together.
Click to expand...

As simple as that dear. They were never destined to be together
G