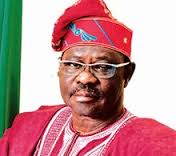 Speaking with PUNCH, Ali said, “He only said that during his 80th birthday. And when he said it, I grudgingly said that he is not God. But that is his own feeling.”

“You know the former president has a way of saying his mind. The problem of the PDP is because we lost the election and the leadership brought this problem,” Ali said.