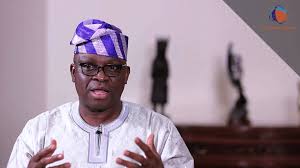 In a statement signed by his Chief Press Secretary, Idowu Adelusi, at the weekend, Fayose outlined some things that were wrong with the move.

He said, “They act before they think and they take decisions before consulting critical stakeholders. That way, they always end up putting the cart before the horse. That is how they have messed up the economy and now have brought unprecedented grief, misery, poverty and suffering on Nigerians.''

“This same Kaduna is where Shiites waylaid a whole Chief of Army Staff; the crisis created is yet to abate as the Shiites continue to defy the authorities to mount public protests. This is the same Kaduna where over a thousand citizens have been slaughtered like rams and the FG has not brought a single of the murderers to book. The situation in southern Kaduna and in other parts remains as tense as ever.

“It is also on this same road that an Army officer was butchered; where herdsmen parade their herds in broad daylight causing avoidable accidents and other inconveniences to travellers. This is the same road where Boko Haram and other criminally-minded hoodlums operate at will”, he said.

“Why are they always leaping before they look”, he asked, saying that the decision to close down the Abuja airport will further worsen the country’s economic recession.

But it's PDP fault , all the problems you have mentioned PDP got a golden opportunity to reconstruct or make things right. Your speech is just a ridiculous to you and your party. Nigerians will not tolerate tyrant like you again.
A

Aminulawal_bigdark said:
But it's PDP fault , all the problems you have mentioned PDP got a golden opportunity to reconstruct or make things right. Your speech is just a ridiculous to you and your party. Nigerians will not tolerate tyrant like you again.
Click to expand...

But APC has been in power for almost 2 years.