Curators
FREE Nigerian Business Directory
✅ NEW - get your business listed and your information shared across social media.
Ad
World heavyweight champion, Anthony Oluwafemi Olaseni Joshua, 27, who defeated Ukrainian giant Wladimir Klitschko in an epic 11 round battle at Wembley Stadium on Saturday, will be honoured for his heroics in Ogun State, Nigeria where his parents were born. 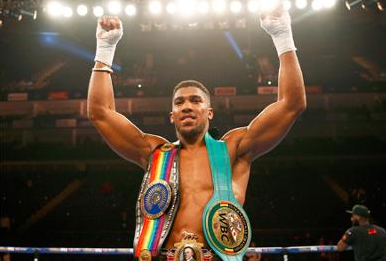 The British boxer was born to a Nigerian mother and a British father of Nigerian and Irish descent.

It was also reported that Joshua’s family own around half of the land and property on one side of the street and the cinema was built by his great-grandfather Omo-Oba Daniel Adebambo Joshua in the 50s.

Majority Leader of Ogun State House of Assembly, Asiwaju Adeyinka Mafe was quoted to have said: 'We are proud of what he has achieved as a son of Sagamu, and we will be happy to do our own little bit to show our appreciation and support for him.'