The police detectives attached to Sagamu Division of the command led by the Divisional Police officer, while responding to a distress call that a gang of armed robbers were robbing on Mr Lukman Yusuf along Ode Lemo road Sagamu, around 2:00am. 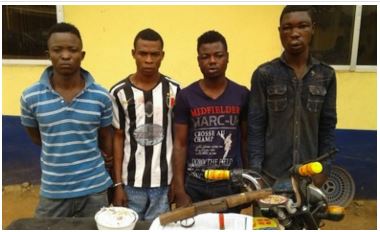 The DPO and his men then swung into action and caught the robbers in the act and arrested 2 of the suspects identified as David Ogunjinrin, and Mohammed Ibrahim.

The robbers had already attacked their victim and snatched his Bajaj motorcycle with Reg No. OGUN DGB 652 WZ, his mobile phones and some amount of money before the police detectives arrived the scene.

The arrest of the two suspects, led the police to their hideout in Onoajegbe Village in Iperu Ogun state where two other members of the gang were arrested. They are Adebayo Segun and Muda Yahaya.

All the suspected armed robbers claimed to be from Lagos State and confessed to have carried out various crimes in and around Lagos and Ogun state before their arrest.