The award was presented to her by the African Investor Magazine on the sideline of the ongoing annual meetings of the World Bank and the International Monetary Fund (IMF) in Washington DC.

She thanked the organisers for the award and described it as an absolute honour and auspicious.

She called on all investors in Africa to join the fight against the deadly Ebola virus disease that is ravaging some countries in West Africa.

“What is happening in Liberia, Guinea and Sierra-Leone and the success we had in Nigeria and Senegal in containing this virus should not be allowed to set Africa back.

“You as private sector and friends of Africa need to send the message that we should not be so afraid of Ebola that we stigmatise the whole continent.

“I think that it is only with your own leadership, as African investors, that the rest of the world can see which way they should pass. So, I am really urging you to be ambassadors to the continent,” she said.

Okonjo-Iweala said that in spite of the challenges facing the continent, African leaders should sustain the successes recorded in the past.

“I think that we as Africans must always take the lead because if we don’t solve our problems, nobody can do it for us.” 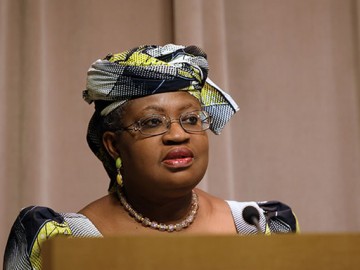