Politics Ondo Election: Jimoh Ibrahim Is A Destroyer, He Can't Be Governor - Fayose

He described the factional PDP candidate as an agent of destabilisation who allegedly had a mission to cause confusion and distraction to the people of the state.

He stated this while speaking on Orange FM political programme in Akure, the Ondo State capital on Tuesday. 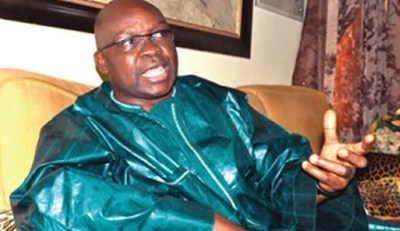 He said some agents of confusion were allegedly using current crisis in the PDP to cause confusion in the party so as to pave the way for the candidate of the All Progressives Congress to win the November 26, governorship election.

He said, “I want my people in Ondo State to stand by Jegede, they should not be distracted. I believe justice will prevail. This is a fight against democracy.

Jimoh Ibrahim has flops in his business - some of which are self-inflicted anyways, but that does not qualify Fayose as a builder. He is no different from Ibrahim.
P

In the village of the deaf and dumb... Someone with one eye is their KING.