The Organization of the Petroleum Exporting Countries, OPEC, have further extended the exemption granted Nigeria and Libya over the output cut imposed on member countries in January 2017.

Nigeria’s Minister of State For Petroleum Resources, Dr Emmanuel Ibe Kachikwu, told the meeting that although the country’s production recovery efforts have made some appreciable progress since October last year, it is not yet out of the woods. 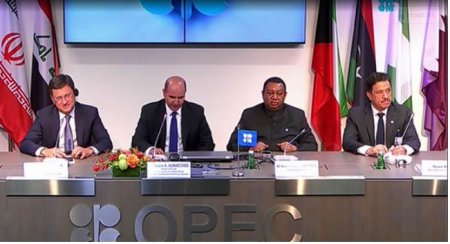 Dr kachikwu explained that Nigeria will be prepared to limit its crude production when the output stabilises at 1.8 million barrels per day.

The five-nation joint ministerial monitoring committee noted that overall compliance by OPEC and non-OPEC participating countries to the agreement on crude oil production cut for the month of August was 116 percent, the highest since the agreement came into effect on January this year.
PLACE YOUR ADVERT HERE
Connect with Business News Readers!

TheLeftWing said:
Free cash for diversification of the economy by looking for oil in Sokoto
Click to expand...

It is so sad. After many wastage on the lake chad. Ours is a govt of deaf and dumb!
Show hidden low quality content