Politics Ortom, From Motor Park Tout To A Minister Of The Federal Republic -Leadership

For Sale - One Bedroom Executive Flat - Lagos (NGN37m)
✅ NEW - car park, swimming pool, 24 hours light/security and more.
Ad
In a country Nigeria where there is economic instability and people hardly think of uplifting the lives of the less privileged, it is however very difficult for someone who is born without silver spoon to begin life from the scratch and make it to the top. But for Chief Samuel Ioraer Ortom, the minister of state for industry, trade and investment, for many people who have come in contact with him will assert that his transformation as a motor park tout into a wealthy societal man is not mistakable.

Born on 23rd April, 1961 in Nzorov area of Nongov in Guma local government area of Benue state, he tasted western education for the first time when he was enrolled into the St. John’s primary school Gboko in 1970 and later moved to St. Catherine’s primary school, Makurdi in 1974 where he completed his primary education in 1976.

Desirous to become a reasonable man even without a famous background, Ortom moved out of Benue state and was admitted into Idah secondary commercial college, Idah in Kogi state in 1976. He did two years in the school before his father’s retirement brought an unceremonious end to his dream of completing western education. The abrupt end of the education of this honourable man was on account of inability to pay school fees. The situation propelled him to give his life to Christ. 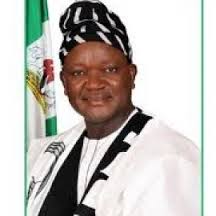 Politics Governor Ortom Of Benue State Used To Be An ‘Agbero’ And Says His Story Should Inspire The Less Privileged.. – Stella Dimoko Korkus.com