First, a recap. Below are the possible offenses Pistorius may be convicted for:

Illegal Possession of Firearms: Prescribed jail time for this is 15 years.

Discharging Firearms in Public: Mr. Pistorius is guilty of having fired his gun twice in public. One in a restaurant on 11 January 2013, and the other through a car roof on 30 November 2012. This attracts 5 years of jail time.

Culpable Homicide: If he is indicted for murder, Newsweek reports, Oscar Pistorius can be tried for 'culpable Homicide', which means he killed Reeva Steenkamp 'negligently.' Penance for this is discretionary, we read, and could take the form of fines or prison time up to 15 years.

Murder: If it is decided that Oscar Pistorius meant to kill Steenkamp with no prior planning intended, he gets a compulsory 15-year jail sentence.

Premeditated Murder: This is the big one. If Pistorius is convicted for premeditated murder he could be facing a 25 year sentence.

Although Oscar Pistorius has been found to be relatively free of mental defects, his lawyers insist that his upbringing and disability have imbued him with a sense of heightened response to danger, and it is upon this they hinge their argument that Oscar Pistorius pulled the trigger 'reflexively.'

They have also suggested that if judge Masipa cannot see reason in the heightened response to danger argument, then Oscar Pistorius actions could be read as "putative self defense" meaning he took genuine steps to protect himself from perceived danger.

If the judge accepts this explanation, Oscar Pistorius will walk.

[Read more about the arguments about the Pistorius Trial here] 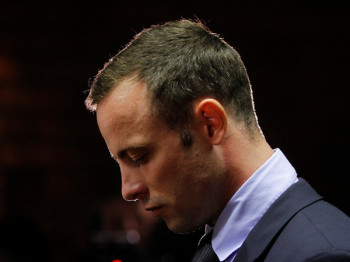 THE QUESTION OF CRIMINAL CAPACITY:

Judge Masipa, reading the defense: "though not clearly expressed in so many ways the defence had hallmarks of temporary non pathological criminal incapacity."

This brings up the all-too-familiar question: did Oscar Pistorius intend to shoot?

The Guardian says "The defence submitted that Pistorius was “vulnerable and fearful”. She will deal with the “plethora” of defences one-by-one."

Judge Masipa has diagreeed, on the basis that there is a difference between a reflex action and an involuntary response.

I disagree with this – there is a huge difference between a reflex action and an involuntary action.

There was no lapse of memory or any confusion on the part of the accused.

He froze, then decided to arm himself and go to the bathroom … He took a conscious decision.

This is inconsistent with lack of criminal capacity.
Click to expand...

"He took a conscious decision to arm himself. It is inconsistent with a lack of criminal capacity. Although Judge Masipa agrees that Pistorius disability might have predisposed him to his 'heightened response to danger', she insists that he is not the only one 'disadvantaged,' speaking of women and children who are also in relative danger most of the time.

She says it would be absurd to expect them all to arms themselves as a result. Masipa's verdict will be given only after considering ALL evidence in this case:

The decision to convict or acquit must be based on all the evidence … Some of it may be found to be unreliable … But none of it may simply be ignored.
Click to expand...

The accused has been a poor witness, says Masipa:

"Another question is why the accused fired not one, but four shots before he ran to the bedroom to find the deceased."
Click to expand...

The accused was clearly not candid with the court when he said he had no intention of shooting anyone.
Click to expand...

The above, however, doesn't necessarily mean Pistorius is guilty, as onus doesn't rest on him, but on the offence. We see that no matter how improbable (but reasonable and possibly true) his account is, it cannot be thrown away by the court.

"The evidence fails to show that the accused has the requisite intent to commit the act, not to talk of actually committing the act."
Click to expand...

So, there you have it. Pistorius has been acquitted of premeditated murder. The state failed to prove he shot Steenkamp with intent.

The court has taken a five minutes break.

From The Guardian: "He can, of course, still be found guilty of murder, if the judge decides that – pre-planning aside – he armed himself and shot with the intention to kill. He could also face a conviction for culpable homicide if she decides there was no intent. Or, of course, he could be acquitted if Masipa decides he acted reasonably out of fear that an intruder was going to attack him."

As court resumes, Masipa explains the "aberration ictus" principle – where an accused, shooting at A, instead hits B. She runs through complicated scenarios and case law, concerned with intention and whether “transferred malice” can apply.

The Guardian:
Pistorius cannot be found guilty of murder. But a verdict of culpable homicide still possible.

I agree that the conduct of the accused may be better understood by looking at his background.

Many [people] have been victims of violent crimes but they have not resorted to sleeping with firearms under their pillows
Click to expand...

Masipa:
'A reasonable person would not have fired four shots into the toilet cubicle'
Masipa says that if Pistorius had woken to see a “silhouette” by his bed and shot that figure, even if it turned out to be Steenkamp, he would have acted reasonably.

According to her, Pistorius “too hastily and used excessive force … It is clear his conduct was negligent.”

With that, the case has been adjourned for the day.