FREE Nigerian Business Directory
✅ NEW - get your business listed and your information shared across social media.
Ad
The Vice President Yemi Osinbajo is currently presiding over a meeting of the National Economic Council.

The meeting, which began at 11:20am, is being held inside the Council Chambers of the Aso Rock Presidential Villa in Abuja.

The chairman of the Nigerian Governors Forum, Abdulaziz Yari of Zamfara State and many of his colleagues are in attendance.

The Acting Secretary to the Government of the Federation, Habitat Lawal, the Minister of Finance, Kemi Adeosun as well as the Minister of Budget and National Planning, Udoma Udoma, are also in attendance. 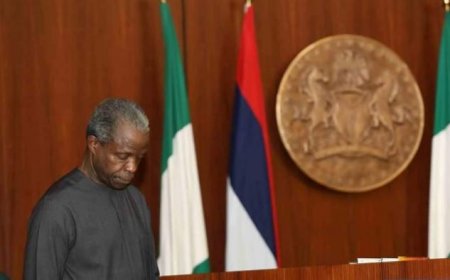 The National Economic Council; established by the provisions of the Constitution of the Federal Republic of Nigeria (1999), as amended, Third Schedule, Part I, Section 153: Sub section (18 & 19); is one of the Federal Executive bodies mandated to advise the president on the nation's economic affairs, particularly on measures necessary for the co-ordination of the economic planning and programmes of the various governments of the federation.

The meeting was still ongoing as of the time of filing this report.
You must log in or register to reply here.