For Sale - One Bedroom Executive Flat - Lagos (NGN37m)
✅ NEW - car park, swimming pool, 24 hours light/security and more.
Ad
Acting President, Prof. Yemi Osinbajo, has issued a presidential directive, which will henceforth (until a constitutional amendment) mandate the executive to submit budgetary proposals to the National Assembly latest by September of every year.

Worried by late implementation of capital projects due to late commencements, Osinbajo followed up with the issuance of three Executive Orders (Presidential Orders), two of which have to do with budget preparations and procurement, fast-tracking budget implementation, guarding against graft as well as saving funds for implementation of government plans and programmes.

The orders according to Osinbajo are in line with the authority vested in him as the acting president, said a release by Laolu Akande, senior media officer in the office of the Acting President. 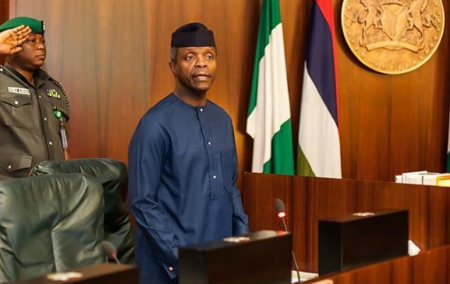 On budget, the order directed as follows: “All agencies, whether or not listed in the Fiscal Responsibility Act, shall, on or before the end May every year, cause to be prepared and submitted to the Minister of Finance and the Minister of Budget and National Planning, their schedule of revenue and expenditure estimates for the next three financial years.

“All agencies shall, on or before the end of July every year, cause to be prepared and submitted to the Minister of Finance and the Minister of Budget and National Planning, their annual budget estimates, which shall be derived from the estimates of revenue and expenditure as projected in their three-year schedule.

Curators
OK. What about signing the 2017 budget?
P

curator said:
OK. What about signing the 2017 budget?
Click to expand...