FREE Nigerian Business Directory
✅ NEW - get your business listed and your information shared across social media.
Ad
President Muhammadu Buhari is being represented this Saturday in Abu Dhabi by Vice President Yemi Osinbajo as Nigeria and the United Arab Emirates seek to build closer relationship and economic ties.

The Crown Prince of Abu Dhabi, who is also the Deputy Commander-in-Chief of the UAE Armed Forces, Mohammed Bin Zayed Al Nahyan, extended an invitation to President Buhari as Special Guest at the Eight Race of the Grand Prize of Union Airways for Formula 1, organised by Abu Dhabi holding this weekend. 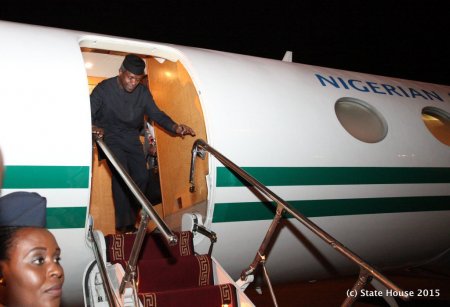 While in Abu Dhabi, Vice President Osinbajo will hold follow-up bilateral discussions on this offer, and other issues of mutual economic and diplomatic concerns, a statement by Laolu Akande, the spokesperson for the vice president, said.

Mr. Osinbajo, who is accompanied on the weekend trip by his wife, Dolapo Osinbajo and the Honourable Minister of State for Foreign Affairs Khadija Bukar Ibrahim left Abuja Friday afternoon and is expected back on Sunday.