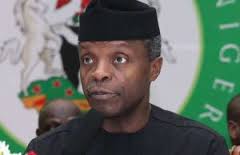 The Nation reports that the Osinbajo-led panel that investigated the two officials, has decided that the duo be dropped and new persons should replace them.

A source who spoke anonymously said, “There were a few administrative errors allegedly traced to the affected officers. These lapses made their return to their duty posts unlikely.

“Some of the findings by the Osinbajo Panel have also made their return impossible. Going by the controversy surrounding the cash haul and the PINE contracts, no serious government will reinstate such officers. Public opinion also does not favour them.”
D

Do your work according to the of law