Coordinating Director, Osun State Ministry of Agriculture, Food Security and Youth Engagement, Dr Oluwabukola Aluko has announced that butchers operating in the state would henceforth pay levy to the government.

Aluko, who made the announcement in a statement issued to newsmen on Wednesday in Osogbo, said that the payment of the levy would commence from April 1.

He said that each cow slaughtered as meat for consumption in the state would attract N1, 000 levy while each sheep, goat, pig and other animals would attract N200 levy. 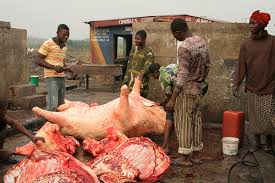 He said that the decision to introduce the levy was reached after an interactive session between Gov. Rauf Aregbesola and butchers association in the state.

“All animals meant for public consumption including animals for ceremonies henceforth must be slaughtered only at government approved slaughter slabs,’’ Aluko said.