The Kabiyesi's newly appointed chief tourism adviser and consultant, Otunba Wanle Akinboboye, disclosed that Oba Ojaja is set to declare Ife a tourism zone on February 26 and to kick start the development of the zone into a tourism destination of world class standard has concluded plans to build a N7.6 billion Ife Grand Resort which will also empower 20,000 widows in the State.

Speaking on these new initiatives, Akinboboye, who has also announced the Kabiyesi said it is a grand design by the Ooni to redesign the tourism map and agenda of Ife by drawing the attention of Africans, the Diaspora and the entire globe to it in a way that has never been done in the history of the former Ife Kingdom, which is not only regarded as the Source of Yoruba but the cradle of South west civilisation. 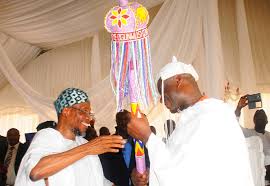 According to him, ‘‘the glory of Ife is finally coming to light. Ife is now the new destination in Africa as the sleeping giant of tourism in Africa wakes up to a new reality,’’ insisting that henceforth the whole world would come to Ife on religious, cultural, economic, educational, and archaeological tourism among others, as the new Ooni constructs a new agenda for the kingdom of Ile Ife.

Akinboboye revealed that the declaration ceremony and the kick off for motherland beckons has been fixed for February 27 with the president of Black Lawyers in England and Wales, Peter Herbert, billed to deliver the key note address while the chairman of Nigerians in Diaspora Organisation (NIDO) America, among a host of other dignitaries are expected at the event.


Source: The Official Website Of The State Of Osun