Nigeria will play South Africa in one of the semi-final games on Wednesday in Namibia, looking to continue their dominance over the Bayana Bayana.

The Super Falcons reached the last four as Group A winners with nine points, while semi-final opponents South Africa finished as runners-up in Group B with four points edging out Ghana on goal difference.

"Actually in the first game, I was not around, so I can't talk about it, but the second game and third one, it was really okay. But we can be 100% sure we have been fantastic. We have our mistakes, I believe we will correct them when we play in the semi-final," Ordega told Goal.

"What really makes me proud in the Super Falcons so far in the tournament are their courage, zeal and eagerness. I can't even tell it all, because everyone is ready to come out in the fight to win. I don't know if it was because we lost the last championship to Equatorial Guinea," she said.

"But, I believe everyone has the ability, zeal and eagerness to play. So, when I came in, I saw it, I was so happy and I decided to pick up the zeal from others too," she continued.

"Everyone is really happy, because it is not an easy task. It had been a tough game from the beginning Ivory Coast, Namibia and Zambia. The ambition is for us to get back the trophy and we not going to relax at anything. We are all hungry to bring back the cup to Nigeria," she concluded.

The Super Falcons have only failed to win the AWC title on two occasions, and those instances, the competition was won by Equatorial Guinea. 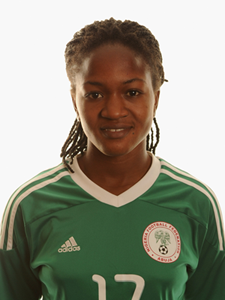