Curators
FREE Nigerian Business Directory
✅ NEW - get your business listed and your information shared across social media.
Ad
About twenty-five people have been reportedly injured in a clash between some Muslims and Egungun worshipers (Masqueraders) in Kishi, Oke-Ogun area of Oyo state. 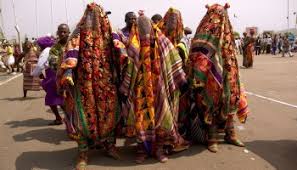 The ugly incident is happening at a time the traditional ruler of the town, Oba (Engineer) Moshood Aweda Lawal Arowoduye 11, the Iba of Kishi is celebrating his 20th coronation anniversary, which is to hold between May 4th(Today) and 6th, 2017.

Ajisebutu revealed that the state police command has now provided adequate security to restore peace in the town.

Daily Posts reports that problem started on Tuesday when a Muslim cleric identified as Alfa Lati, insisted that masqueraders observing the annual Egungun festival should not pass through his (Alfa Lati) street, located at Koso, Mapo area of the town.

The masqueraders considered this as an affront on their own religion, and passed through the street, claiming that Kishi town belongs to every indigene of the town, irrespective of religious affiliation.

It was also gathered that following an instruction from Alfa Lati, his followers reportedly attacked the masquerade (Egungun) with stones and other dangerous weapons, a situation that forced the Egungun to remove his mask, and ran for dear life.

In the melee that ensued, no fewer than 15 followers of the masquerade reportedly sustained serious injuries, and this made the furious Egungun worshippers to plan a reprisal attack on Wednesday.

A source informed journalists that over 10 people from both sides were also injured during the reprisal attack on Wednesday.

It was also learnt that some of the injured persons have been taken to the University of Ilorin Teaching Hospital, Ilorin, Kwara state for medial treatment.
O