Pandemonium broke out late on Sunday at the Nnamdi Azikwe International Airport, Abuja as policemen moved to arrest the Chairman of the League Management Company, Shehu Dikko. 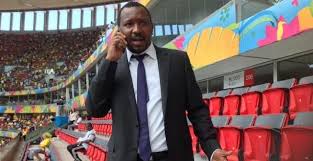 The LMC boss was returning from Ndola, Zambia in company with the President of the Nigeria Football Federation, Amaju Pinnick, and some board members.

The plain clothes policemen on sighting Dikko moved to arrest him, but it was resisted by the people around.

To effect the arrest, one of the policemen fired gunshot, but they did not succeed.

It would be recalled that Justice I.I. Kunda of a Jos, Plateau State High Court recently committed Dikko and the LMC’s Chief Operating Officer, Salisu Abubakar, to 14 days in prison for disobeying a court order.

The ruling was sequel to a suit filed by the management of Giwa FC praying the court to order its reinstatement to the league.