Chief Anabs Sara-Igbe, a chieftain of the Peoples Democratic Party, PDP has accused Minister of State for Education, Nyesom Wike of causing the rift between President Goodluck Jonathan and the Rivers state Governor, Rotimi Amaechi, so that he (Wike) can become governor in 2015.

In an interview with PUNCH Sara-Igbe said, "The issue of the crisis between Amaechi and the President is a self-made scheme of a particular aspirant who feels that such is the best way to achieve his ambition. And that aspirant has been able to bring fire at the backyard of the President to say ‘well, if you don’t support me, this fire will burn you. But if you bring me, I have the capacity to off this fire.’ And so, Mr President is being arm-twisted".

"As a person, I will not say Wike is a bad man or he is a good man but what I am saying is that Wike, as an Ikwere man, has spoilt the whole thing because an Ikwere man has ruled. Celestine Omehia ruled for six months and handed over to Amaechi and Amaechi has ruled for over seven years now.

"Ikwere has taken it, Rivers State is made of more than 20 ethnic groups. So why must one ethnic group dominate it over the entire state? It is not fair. His (Wike’s) candidature will cause tension in the state and there will be resistance from the people of Rivers State and don’t forget that Amaechi is a sworn enemy of Wike, it will also generate bad blood and tension.” 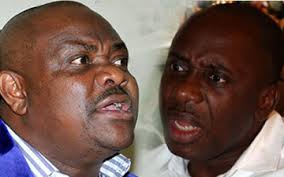 Politics Governors at war: I am not ‘Gandollar’ or bribe taker, Wike replies Ganduje – P.M. News