Opposition party, Peoples Democratic Party (PDP) has described the N6.8 trillion 2016 federal budget presented by President Muhammadu Buhari on Tuesday, December 22 as a big fraud and executive conspiracy tailored towards mortgaging the future of the nation.

The party, in a statement queried President Buhari’s decision to borrow N2 trillion, the biggest in the history of the nation as the height of recklessness and deceit from a government that trends on propaganda.

Buhari tagged the 2016 budget of change. 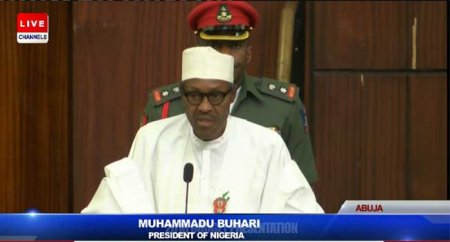 PDP berated the Federal Government for trying to use their bogus welfare programme and phantom capital projects as cover and conduit to syphon the funds to satisfy partisan interests, particularly to settle huge campaign debts.

“It is obvious that this budget is an extension of the campaign promises of the APC government, presented as a manifesto filled with bogus promises which implementation will be inconclusive, thereby allowing the APC to once again deny their promises.

I'm trying not to sound like supporting the opposition but it's really not worth it if we have to borrow money to finance campaign promises like feeding school kids, paying unemployed graduates N5k monthly. If we don't have the money to do them we don't have borrow to do them.
Show hidden low quality content