PDP Senator, representing Ogun East, Buruji Kashamu, has floored the Ekiti State Governor, Ayodele Fayose over his statement calling for the resignation of President Muhammadu Buhari due to his ill health.

The Ogun born senator described the Ekiti governor as a “misguided state governor” who is acting like a sick person for asking President Muhammadu Buhari to resign.

Kashamu said when Nigerians are praying for the quick recovery of the President, Fayose is insisting on the President’s resignation, an indication that the governor lives on “anti-depressant drugs.”

Kashamu in an advertorial in The Nation, said, “It is most unfortunate that while eminent and responsible Nigerians are praying for the quick recovery of our dear President, all a misguided state governor could do, apart from chasing the shadows of an illusionary elongation of his tenure, is to call for the resignation of the President. Is there any vacuum in governance? No! 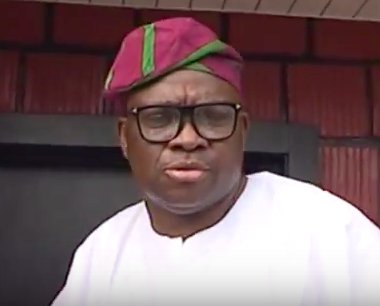 “We are all living witnesses to the marvelous work that the structure that has been put in place by this government is doing seamlessly. Anybody can be sick. Fayose himself is the one acting like a sick person; his erratic and unpredictable nature gives the impression of someone who lives on anti-depressant drugs.

“This is confirmed by his irrational call for the president’s resignation and compulsive rhetoric in the guise of opposition. Fayose should concentrate on the task of governing Ekiti State; per chance he might end up accomplishing something meaningful.”

The lawmaker noted that it’s unfortunate that Fayose, “burns his energy on unimportant things instead of using it to serve his people and fight for the interest of the Yoruba race”.
D