Curators
The Independent National Electoral Commission (INEC) has issued a certificate of return to Diri Douye as governor-elect of Bayelsa state.

Douye received the certificate of return from Rose Oriaran-Anthony, INEC secretary, at the commission’s headquarters in Abuja.

Also presented with a certificate of return on Friday was Lawrence Ewrujakpor, deputy governor-elect.

Douye was declared governor-elect after the supreme court sacked David Lyon of the All Progressives Congress (APC), who was announced winner of the November 2019 governorship election. 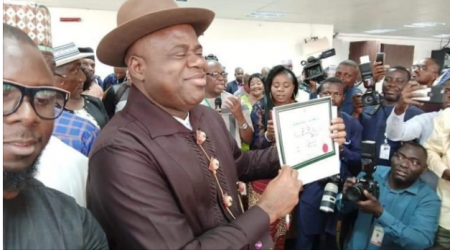