Curators
FREE Nigerian Business Directory
✅ NEW - get your business listed and your information shared across social media.
Ad
Two soldiers attached to the Joint Military Force (JTF) in the Niger Delta, Operation Delta Safe, died in a gun duel with sea pirates on Wednesday, an official has confirmed. 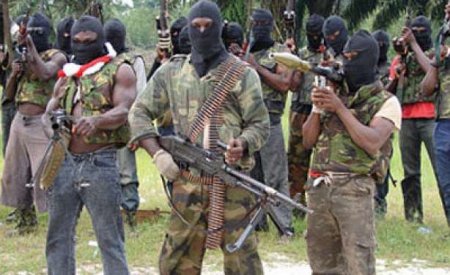 The soldiers were part of a team dispatched in response to a distress call on an attack by pirates operating in Southern Ijaw Local Government Area of Bayelsa, Maj. Abubakar Abdulahi, the Spokesman for JTF, confirmed.

He described the incident as sad but added that efforts were on to bring the perpetrators to book.

“Effort is on-going by the JTF to track and apprehend the criminals,” Abubakar said.

He also said that troops of Joint Operation DELTA SAFE on patrol around Iyalama Adama axis of Rivers on Wednesday discovered and destroyed 13 illegal refineries.

He said that no arrest was made as the operators fled before the troops got to the site.
You must log in or register to reply here.