According to Vanguard, the suspects who were all in military attire were arrested by youths while they were fleeing in a canoe after escaping from police detention and handed over to Ilado Police post, near the Ajakoyi Beach. 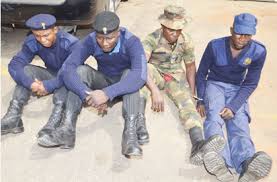 They were later handed over to the Special Anti Robbery Squad, SARS, of the Lagos State Police Command, Ikeja.

A resident, Wasiu Omojola, who narrated the incident to Vanguard said: “We are predominantly fishermen but some of us do oil business. The military personnel used to come around to extort money from us daily. We didn’t even know that they were fake officers. They would come in military uniform. Their leader whom we later realized is an Army Sergeant would dress as an Army Commander. He would gather us and warn that the Army High Command had sent him on a special duty.