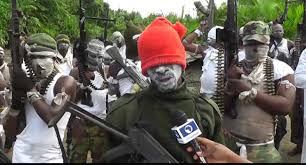 Pepple, also known as Urban Gorilla, is alleged to be responsible for a long list of kidnap cases in Port Harcourt and its environs.

He was arrested weeks after the police authorities declared him wanted and launched a manhunt for him.

The suspect is said to have already confessed to the police that he is the man behind the murder of Soboma George, a top commander of the Movement for the Emancipation of the Niger Delta, MEND, in 2010.

Gorilla was declared wanted when cases of kidnap of medical practitioners especially doctors and pharmacists became rampant in the Niger Delta region.

The police, said the militant’s arrest led to the mopping up of most of the members of his gang among whom is Chief Aghara Lobito Emmanuel

According to the police he was arrested through intelligence gathering analysis by the Technical Intelligence Unit (IIU) of the police to ascertain his location in Port Harcourt.

In his confession, he told police that as a member of the Niger Delta Avengers, he was an important commander because he knew what it takes to blow a gas plant, pipelines and get maximum impact.
J

Another breakthrough by the police after they caught a member of the Niger Delta Avengers
You must log in or register to reply here.