Metro Police Forced Me To Write Statement At Gunpoint - Graduate

For Sale - One Bedroom Executive Flat - Lagos (NGN37m)
✅ NEW - car park, swimming pool, 24 hours light/security and more.
Ad
Daniel Yosua, a 30-year-old graduate, who was paraded by the Lagos State Police Command as a suspect along with some hoodlums said he was made to give his statement at gunpoint at a police station when he went to report a street fight. 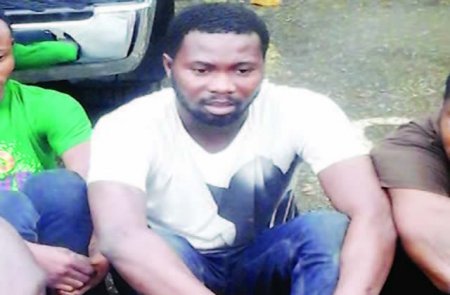 Yosua, a native of Okpara, Delta State, stated that he was arrested and detained at the Mile 12 Police station after he had gone to report the fight on Sadiku Street in the Mile 12 area where he resides.

It was learnt that Yosua and two others were arrested by the police on Friday before they were moved to the Ketu division for onward transfer to the State Department of Criminal Investigation, Yaba, for further investigation.

Yosua who spoke with newsmen while been paraded for robbery, said police officers held gun to his head while forcing him to write the statement at the station, shortly after he went to report a fight.

He said, “It was on Friday, October 9, on my street in the Mile 12 area. The street fight started at about 8pm. My friends and I were in a shop discussing when we heard bottles breaking a few metres away. We quickly ran inside the compound of one of my friends.

“That was where I hid while the thugs fought on my street. After about 10 minutes, I came out, and found out that one of my friends, Bisi Olateju, was injured. I then told others that I was going to the police station to report the fight. I went to the Mile 12 Police Post to make the report.

“When I was going back home, one of the police officers, a woman, said I should be on the lookout, and bring anyone who was among those fighting.

“I then rushed my friend, Olateju, to the hospital. As I stepped out of the hospital premises, one of the hoodlums, who learnt I went to the station to report, came around to make trouble.

“After much noise, he was beaten by some other persons, and we all went to the police station. The hoodlum was slightly injured in the mouth. When we got to the station, to my surprise, I was arrested and detained.

“I told the policemen that I was the one who came earlier to report the street fight. One of them just pointed a rifle at me, and said I should begin to write a statement. That was how I was detained.

“Later on, I was transferred with the hoodlum to Ketu division and then to SDCI, Panti. I had never been involved in violence. I made a mistake of going to the police to report the incident.

“A policeman, Adeyemi, who is attached to Ketu division, is the mastermind of my ordeals. My family members had gone to explain to him on several occasions, but he would not listen.”

World Man tries to steal domain name at gunpoint, gets 14 years in prison instead – The Next Web