For Sale - One Bedroom Executive Flat - Lagos (NGN37m)
✅ NEW - car park, swimming pool, 24 hours light/security and more.
Ad
Pope Francis today asked for forgiveness for the "sins and failings of the Church and its members" during Rwanda's 1994 genocide. 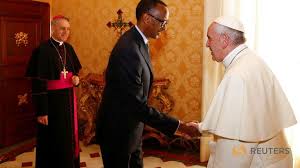 According to The Jerusalem Post, in a meeting with Rwandan President Paul Kagame, Francis said he hoped his apology would help promote peace in the African country, which was torn apart by genocide in 1994, and contribute to a "purification of memory".

About 800,000 people from the ethnic Tutsi minority as well as moderates from the Hutu majority were massacred in the 1994 genocide. Some massacres took place in churches where people who had sought refuge were killed by militias.

A
World Pope Francis - Women Will Never Be Catholic Priests