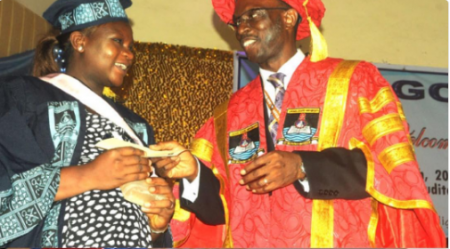 Orefuwa graduated with a cumulative grade point average of 4.74 in accounting education at the 21st convocation of LASU.

The chartered accountant on Wednesday said she would have given up on her dream of pursuing university education but wanted to satisfy her father.

Orefuwa said she became an associate accountant in 2010.

“When I eventually secured admission to LASU, my aim was not to be the best graduating student. I just wanted to satisfy my dad’s yearning,” she said.

“The journey through the institution was not easy; it took me seven years of writing the UTME before I finally gained admission in 2012.

Orefuwa, who is pregnant, got married at the beginning of her final year.

“I had a CGPA of 4.72 before marriage and I graduated with 4.74. I got married during my final year in 2015 and my husband was very supportive throughout that period,” she said.

Apr 16, 2017
abujagirl
A
K
Metro How I Wrote JAMB 12 Times Before Gaining Admission Into OAU - Student