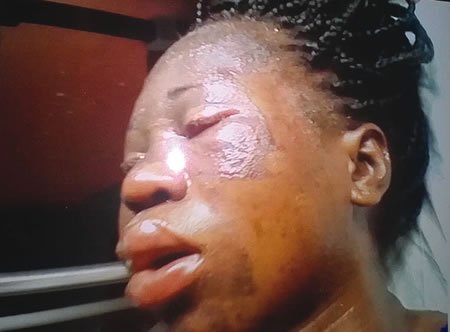 A 25-year-old woman, Chiwendu Nwobodo was bathed with hot groundnut oil by a neighbour in the Surulere area of Lagos over N900, also lost her two-month-old pregnancy.

Her husband, Chigozie said his wife had also developed complications as her left ear was now oozing pus.
The suspect and Chiwendu lived on ogbomoso street, Ijesha area of Lagos state. Disagreement broke out of them during which Chiwendu kicked away some balls of puff-puff belonging to the suspect. Iya Daniel demanded for repay of N900, which the victim's husband promised to give her.

She was reportedly coming out of her room when Iya Daniel accosted her and emptied a pail of hot groundnut oil on her.

She was subsequently rushed to the hospital and placed on admission.

It was gathered that the suspect, Iya Daniel, had been re-arrested after her first bail from the police net and detained at the State Department of Criminal Investigation, Yaba.